A downloadable game for Windows

Welcome to the Caverns of Twitch!

I didn't have time to put the story in the game. Essentially you (streamer) are a guide and the denizens of twitchland (viewers) are rallied to defeat a dark evil looming in caves underground. Starting out they may be humble peasant folks with sticks, t-shirts and bandannas. Eventually they may end up with light sabers, in plaid, with jester caps! Rally your viewers to the cause. Use them to help defeat the great evil below! The guide (streamer) controls when to return to town and heal, who will be selected to fight each battle, and can upgrade the viewers!

There are about 7 battles in the jam version

Warrior Actions:
attack - attacks
defend - taunts damage away from others

Healer Actions
heal - duh
cure - nothing, don't use! (soon it will cure disease and poison, it's called scope kids)

Streamer:
Enter your channel name into the box below and then click play!
After the game starts a bot user named "tigerjams" will join your channel
Mod this bot, similar to most other bots it needs elevated permissions to be chatty during the game
Your role as the streamer is to pick the players from chat that will battle in the fights!
you are in control of the party.. kinda... a little, hey it is just like streaming!

when the game loads type "join" in chat to join
after you join there are several commands you can do.
In Town:
(whisper the bot tigerjams [/w tigerjams <command>])
role <mage, healer, warrior> -- changes your role
actions -- lists your available actions
action <action> -- changes your battle action
stats -- lists your stats
leave -- leaves the game

In the caves:
actions -- list your actions
action <action> -- changes your action

If you are a healer do not user cure! I didn't code it into the game yet :(

If you do not have enough players you can spawn npc members, but they will only be warriors. Join with your own twitch account via chat to switch into a healer or mage as needed if you intend to play alone. Just start the game, put in your twitch handle, go to your channel (even if you do not stream it will still connect and work fine) This is kinda like playing a board game alone and not as fun. But I put it in there if you can't find someone streaming it and still want to play

Hint: I know a guy who will play this with you on his stream

Coming soon (all this was cut due to time) 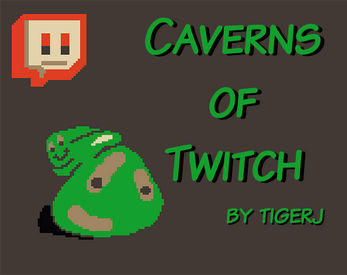